No-Briner™ and KNeW Process® Provide Mines and Industry with Solutions

As the mining industry faces increasing pressure from environmental groups and
governments, it must find new ways to eliminate hazardous Acid Mine Drainage (AMD) from its operations.

Acid mine drainage is the outflow of acidic water from certain types of mines. Contaminated mine water is generated when rock containing sulphidic minerals is exposed to water and oxygen, resulting in the production of acidity and high concentrations of metals and sulphate in the water.

Reverse Osmosis (RO) is one of the most commonly used technologies by mining operations to treat AMD. It is a relatively
effective way to clean some of the water for reuse. But the RO process only cleans some of the water, and the remaining water exits the process as a brine stream (concentrated salt water) and cannot be reused. It is also very hazardous to the environment.

There are over 16 mines in the USA that are producing large volumes of AMD that needs to be treated. Environmental regulations are forcing newer mines to use modern technologies such as Reverse Osmosis (RO) to treat their AMD. There are over 200 RO plants around the world that are treating acid mine drainage, and all of them produce a residual brine waste stream, which is also a major environmental problem.

Every day many millions of gallons of water loaded with arsenic, lead and other toxic metals flow from some of the most contaminated mining sites in the U.S. and into surrounding streams and ponds without being treated. 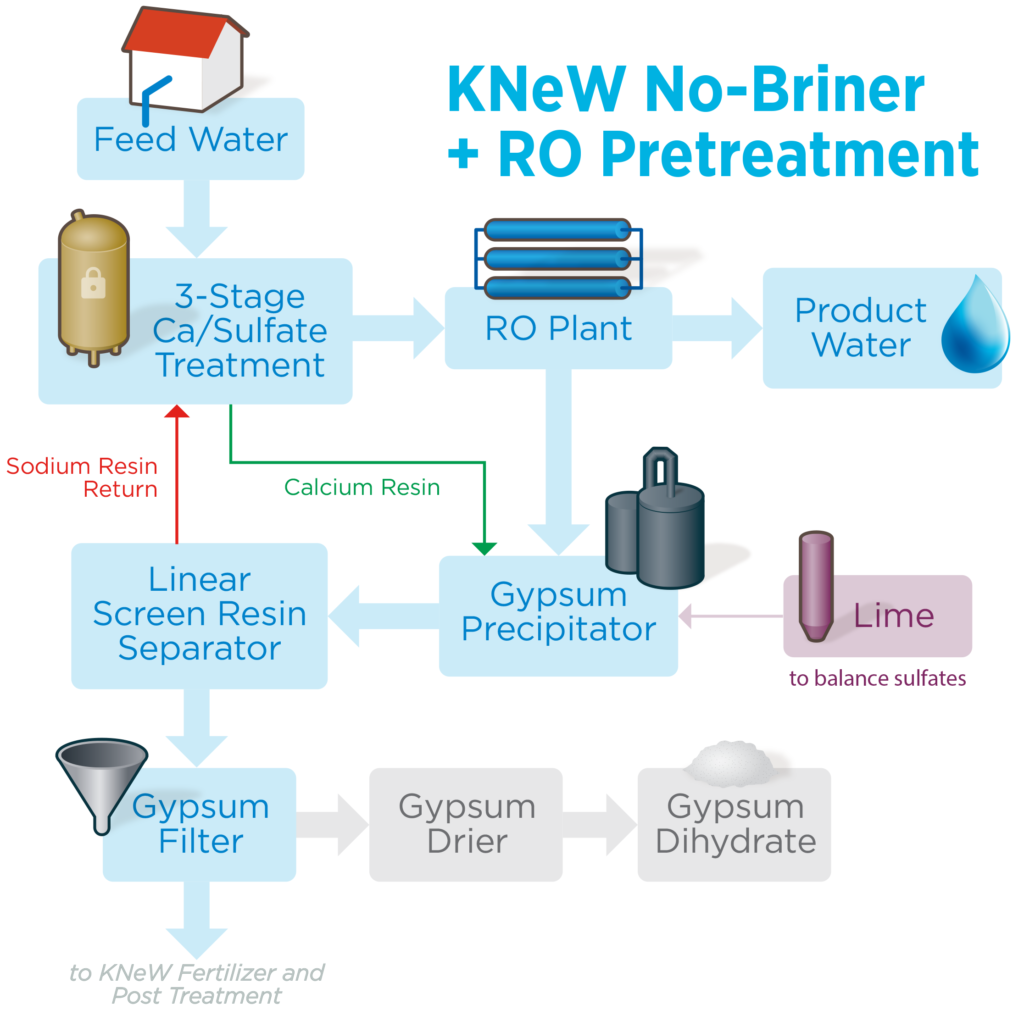 Solutions for Mining and Other Industries

The KNeW Process® was originally invented to address the post treatment of AMD coming from mining operations. But chemical engineer and inventor, John Bewsey, has recently adapted the technology to create a pretreatment process for water entering an RO plant, dubbed No Briner™. This new adaptation of the KNeW Process has significant implications for mining operations using RO:

Calcium and other positively charged ions (cations) bond with negatively charged sulfates and sodium (anions) in the AMD feed water. When combined, these positive and negative ions produce gypsum, which fouls the RO membranes. Membranes are the core of RO technology, but they are expensive and must be replaced when fouled. The No-Briner process first removes the cations before they enter the RO process, then extracts Sodium (brine) from the RO process and returns it to the feed stream, which recharges the membrane resins.

Based on data collected from the demonstration plant, computer modeling, and input from a major membrane manufacturer, KNeW estimates that removing calcium and all cations before the RO process can increase the quantity of clean water by as much as 15%, reduce the residual brine stream by as much as 15%, and potentially extend the life of the membranes by as much as 300%.

Increases Water Volume
RO plants must run at lower water pressures to allow the membranes to absorb the cations from the AMD. Because the No-Briner removes the cations before they enter the RO, the membranes perform more efficiently. This allows the RO plant to run at higher pressure, which can increase the production of clean water by as much as 15%.

Creates New Revenue Opportunities
With increased water flow and purity, mining operations can provide clean water to nearby farms and communities. They can also create new revenue opportunities by selling the gypsum and other commercial products on the open market.

Applications for Other Industries
The KNeW No-Briner + RO Pretreatment can be used for other RO plants, as well, including municipalities and industries who need clean water for human consumption.

Combining the no-briner pre-treatment with the KNeW Process post-treatment eliminates brine discharge streams entirely. Nearly 100% of the water is treated and converted into clean, fresh water. Evaporation accounts for approximately 2% of the total water processed. And with the KNeW Process post-treatment, valuable fertilizers and building materials are produced, such as potassium nitrate, ammonium sulphate, gypsum and plaster of Paris. This application dramatically lowers operational costs of the RO process, while providing new revenue sources and environmental benefits that can dramatically change negative public opinion of mining.

©2019 The KNeW Company. All rights reserved.